More than 400 pairs of glasses were donated, while 130 people are in need of eye surgery. The FON.T.ES. campaign is supported by IAPB Italy 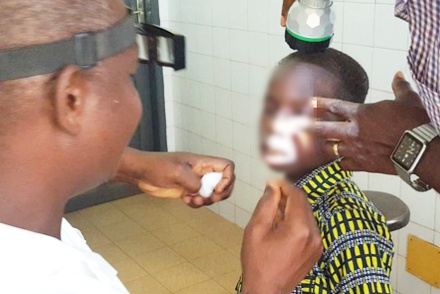 Free eye examinations, followed by a donation of glasses and medicines, were performed during a mass screening for eye diseases in Togo, from 7-11 May 2018. The campaign was conducted by the nonprofit organization “FON.T.ES.-SO.T.ES.-Togo”, thanks to a project supported by the International Agency for the Prevention of Blindness-IAPB Italy.

The Association Fondation-Solidaire Terre of Esperance Togo, in collaboration with Togo’s Ministry of Health and the national program for the prevention of blindness, aims to improve the living conditions of poor and vulnerable people.

Thanks to news of the initiative being spread by word of mouth, it was also possible to examine many people who had travelled long distances, so the whole northern area of Togo benefited from the eye examinations, not just the population of the Grand Bassar, as originally expected. A total of 1,500 people were examined.

Not only were 407 pairs of glasses distributed, but cataracts were diagnosed in more than 100 people. So far, 20 of the 130 surgical interventions deemed necessary have been planned. Eye illnesses were diagnosed in 29 people, while a foreign body was found in the eyes of 13 other people (the object was removed during the examination). Five people were urgently operated on and visual disabilities were diagnosed to nine children.

After a visual acuity measurement, followed by an ocular fundus examination and a check up with the slit lamp, the people affected by the most serious problems were referred to ophthalmic centres in nearby cities, such as Kara and Sokodé, since Bassar is not equipped with suitable ophthalmic services.

“We have planned other projects – Association FON.T.ES. writes – and we would like to extend free eye mass-screenings like the ones we have carried out these days to other countryside areas of Togo. Many people are requesting us to do so and many are in need of it.”

We take the opportunity to express great and sincere thanks to our generous partners: the association Gruppo St. Francesco di Assisi Onlus and its President, who have supported us for two years; the Pastoral Unit of Barbarano and Mossano and IAPB Italy, which have financed this campaign. It is thanks to them that it was possible to organize this campaign, together with all the individuals and the associations that have helped us by sending glasses and medicines.